If you haven’t been involved in a Microsoft Teams vs. Zoom debate, where have you been the last few years? During the pandemic, the company I worked for made the shift from Zoom to Teams, and everyone and their dog had an opinion on which app was better. Two years later, the jury’s still out.

Teams and Zoom are both excellent video conferencing apps—but which software is the right choice for managing your remote meetings?

Zoom vs. Teams: Which should you choose?

Choosing between Zoom and Microsoft Teams boils down to what your priorities are. Here’s the main difference:

This Microsoft Teams vs. Zoom comparison table will give you a quick overview of how they stack up. Read on for details on some of the more notable differences between the two apps.

Microsoft Teams is better for maximizing meeting (and non-meeting) productivity

Because Teams is an all-in-one tool, it has a really robust set of features to help with productivity. Think of it like Zoom, Slack, and Google Docs all rolled into one. And then some, honestly.

For example, there’s a Teams chat feature called loop components that allows you to create meeting action item lists in the chat window while you’re in a meeting. You can add due dates and trigger notifications to the relevant people in the team chat, so everyone involved can see progress through the tasks. 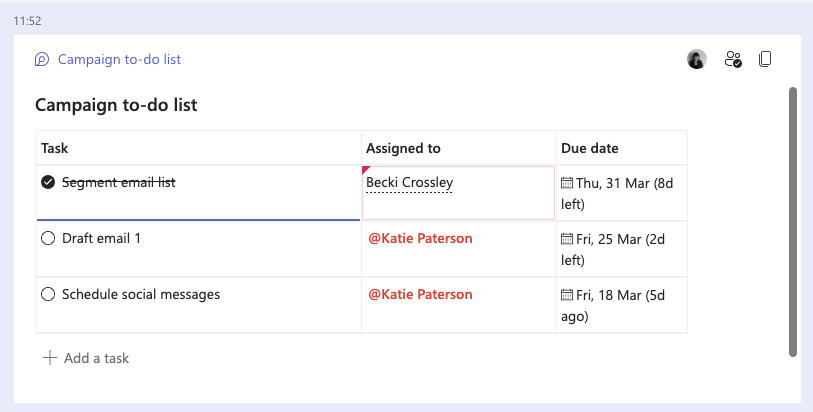 As someone who hates it when meetings lose focus, I love this feature. And Zoom doesn’t have any features that even hold a candle to it.

Zoom and Teams both offer video recording and transcripts (basic features for a video conferencing app), but once again, Teams has some built-in productivity features that take it up a level. For example, in Teams, the recording is emailed out to all invitees and is saved in the meeting chat window, so it’s easily traceable without you having to do anything. With Zoom, you need to go out of your way to send the recording to whoever needs it (or chase down the host if you’re a guest). Zapier helps with that, by automatically uploading Zoom recordings to Google Drive, or anywhere else, but Teams has it built in.

Because Teams is meant to integrate into the day-to-day of running an organization, it also includes above-and-beyond features like 1,000 GB of space—per user—to store company documentation and a Wiki for processes. We moved all our process documentation from shared folders to the Teams Wiki so that they were available to access anywhere. This just isn’t the kind of thing Zoom is designed to do.

For starters, Teams offers a lot more than Zoom where chat functionality is concerned. It’s clear from the screenshots below in the feedback section that Zoom chat, while totally passable, is a bit more basic when you compare it to Teams.

Zoom chat has emoji—great. But what if you want to send GIFs or stickers to your totally professional coworkers? In Teams, you can take it to the extreme, and personalize stickers to call people out (keep it nice!) or reference projects you’re currently discussing. 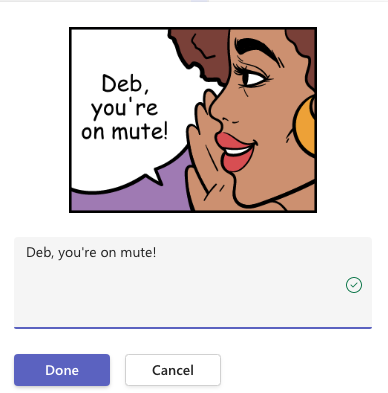 Zoom and Teams both offer whiteboard features. Zoom’s gets the job done—you can annotate in a variety of ways, including some interesting vanishing arrow options, and it’s pretty easy to navigate. But Teams recently updated its whiteboard with some extra features that make it stand out.

For example, there’s a templates feature that has everything from affinity diagrams to SWOT analysis tables. It has everything you could possibly need to feel more connected during a remote team meeting—and it looks pretty, too. 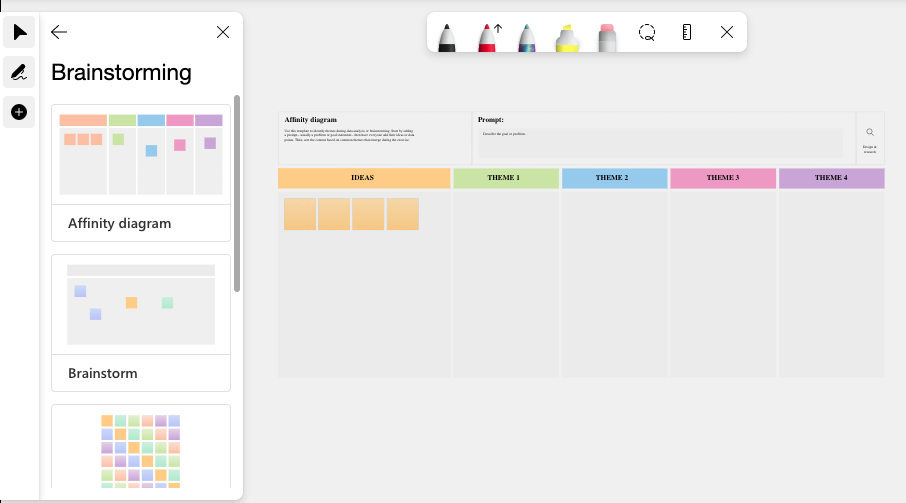 P.S. The screen sharing function in both Zoom and Teams is pretty sophisticated. They both even offer remote screen control, which is useful for collaborating on a whiteboard or if someone is struggling with tech issues during a meeting. We had a board member who was a bit scared of tech, so if she was ever presenting to the company, someone would dive in and give her a hand with slides if needed. It’s a really nice touch that both apps offer.

It’s beyond easy for external participants to join a Zoom meeting from anywhere on any device—all you need is a link. This makes it a great option if you host a lot of meetings, large or small, with people outside your organization. The frictionless experience for the people you’re inviting to chat will be a win for both of you.

With Teams, you need the app to access a meeting on your phone or tablet, and you need to be on Microsoft Edge or Chrome to join via the web. It’s not the end of the world, but it’s a little more restrictive. And let’s be honest—when’s the last time someone from another organization invited you to chat and sent you a Teams link? Didn’t think so.

Zoom is also much stronger when it comes to using video conferencing for marketing and business growth. The ability to stream meetings to social media is available on the basic Zoom meeting package—that’s indicative of where Zoom’s strengths lie. It even has a whole separate package just for running webinars and events. While webinar hosting is available on Teams Business Standard, it’s more of a side option. The focus of Teams is internal and isn’t meant to attract a new audience.

Both Zoom and Teams are powerful video conferencing software, and on paper, they’re neck and neck when it comes to video resolution (both offer HD resolution of 1080p at 30fps, if that means anything to you).

But it’s pretty well understood that Zoom tends to be better at coping with larger meetings, and at keeping people in the call even if they have a bad internet connection. And it makes sense: Zoom is 100% focused on video conferencing, so its streaming quality is naturally going to be better. Teams is juggling a load of other collaboration features, which means making sacrifices—though minor—where video quality or connection are concerned.

This is also probably why participant capacity on Teams is just 300, whereas Zoom allows for up to 1,000 participants (with the large meeting add-on). We actually used to switch over to Zoom from Teams whenever we had all-company updates because Teams couldn’t cope so well with the large group.

Both Zoom and Teams have great integrations

Zoom and Teams are both solidly integrated with other apps, so you can connect each of them to your existing tech stack pretty easily.

Zoom natively integrates with way more apps than Teams (almost 2,000+ vs. Teams’ 700ish), but that number doesn’t tell the whole story. For starters, both apps integrate with Zapier, which means you can connect them to several thousand other apps.

Plus, Teams has a really tight integration with other Microsoft 365 apps, so if you’re a OneDrive or OneNote user, for example, those types of integrations will be more seamless and built in to the user experience for you in Teams.

Teams vs. Zoom: The verdict

Barring a few details, Zoom and Teams are pretty comparable when it comes to video conferencing. But they’re completely different tools that have been built to do fill very different gaps.

And as for the cost: both apps have free plans that get the job done, but when you go beyond that and start paying for these apps, it’s really like comparing apples to oranges since they’re designed to do totally different things.