As the so-called creator economy evolves and expands, ecommerce could become a significant revenue channel, helping to create new business models and drive the development of new commerce platforms.

The terms “creator” and “creator economy” are a little ambiguous, perhaps because the idea of a creator is relatively new. For example, writer and consultant Hugo Amsellem of Arm the Creators uses a Venn diagram to define creators, placing them at the intersection of individuality, leverage, and rebellion.

Another description is to imagine an individual who creates original content, publishes it in some manner (typically online), and derives from it either a part-time or full-time income.

Thus, “creator” could describe someone such as journalist and author James Clear, who used his popular email newsletter to create a massive following and eventually promote his best-selling book, “Atomic Habits.”

This description would also fit musician and music producer Rick Beato, who uses his popular YouTube channel — with 2.54 million subscribers at the time of writing — to sell courses, books, and branded merchandise as well as generate ad revenue from views. 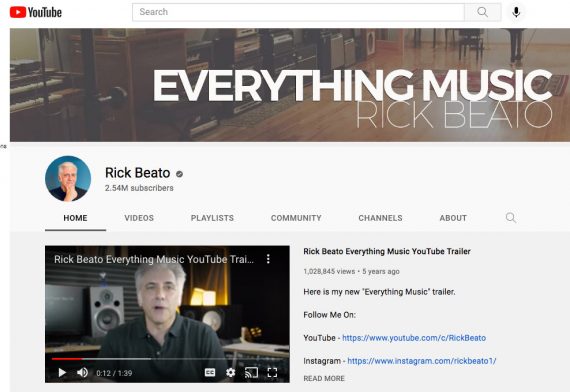 Rick Beato is a creator. He has a YouTube channel with millions of followers and earns income from his content and associated commerce channels.

If Clear and Beato are examples, the creator economy may describe their businesses and the platforms and tools needed to support those businesses.

“We’re just seeing the tip of the iceberg of the creator economy,” said Ricky Ray Butler, CEO of marketing agency BEN Group, according to an Insider Intelligence report from June 2021. “It’s growing faster than ever, and there are also more creators now than before. That opens the door to a lot of opportunities and even more decentralization of content.”

The report went on to say that some 50 million folks worldwide consider themselves to be a creator, and at least 220 companies exist to serve creators specifically.

Many of these companies are aimed at helping creators monetize their content and associated products.

Nice at the Top

Earning money as a creator, however, is difficult for most.

“Just last year, YouTube creator David Dobrik’s monthly AdSense checks from the platform were $275,000 for an average of 60 million views. On Substack, the top 10 creators are collectively bringing in more than $7 million annually. Charli D’Amelio — who recently became the first TikTok creator to surpass 100 million followers — is estimated to be worth $4 million at age 16. She started on TikTok just a year and a half ago,” wrote Li Jin in a December 2020 article for the Harvard Business Review. Lin is the founder and managing partner of Atelier, a venture capital firm focused on lowering the barriers to entrepreneurship and broadening economic opportunities.

“​​But while some have been propelled to massive stardom, examples of a wide swath of the population achieving financial security from these platforms are few and far between. The current creator landscape more closely resembles an economy in which wealth is concentrated at the top.

“On Patreon, only 2% of creators made the federal minimum wage of $1,160 per month in 2017. On Spotify, artists need 3.5 million streams per year to achieve the annual earnings for a full-time minimum-wage worker of $15,080,” wrote Jin.

As it evolves, the creator economy will need a middle class, according to Jin, for most creators to earn a steady income sufficient to live on.

Jin goes on to suggest a list of 10 strategies aimed at encouraging a middle class of creators. These strategies mostly focus on changes to monetization policies, creator platforms, and the availability of capital.

Jin’s suggestions make good sense, but some creators are already supplementing with commerce the income they earn from royalties and ad sharing.

Like Clear and Beato above, creators can sell everything from songs to ebooks to online classes. And in some cases, their commerce endeavors could earn more than advertising and royalties.

This fact alone has the potential to influence how the creator economy evolves. It may be easier for creators to add a downloadable ebook or an ear training course (one of Beato’s products) than waiting for YouTube, Instagram, or a future platform to make advertising and algorithms more egalitarian.

This relative ease, however, is not limited to transaction-based business models and platforms.

Likely, more providers will emerge aimed at the convergence of content and commerce. These solutions could fill gaps in existing options. Perhaps it involves adding content hosting and sharing to an existing platform — imagine Shopify becoming a much better content management system or Amazon buying and incorporating a social media platform.