I’m in the weeds here. Let me back up.

I recently noticed a lot of people use the words “startup” and “small business” interchangeably, which strikes me as odd. For one thing, some small businesses are hundreds of years old—not exactly starting up. For another, plenty of companies that people currently call startups are actually quite big.

I asked my Zapier coworkers what they think startup means—answers varied wildly. Some said startups were just small tech businesses. Others said the difference was seed money, or how recently the company was founded. Some said startup was just a buzzword. The objectively best answer came from my colleague Leah. 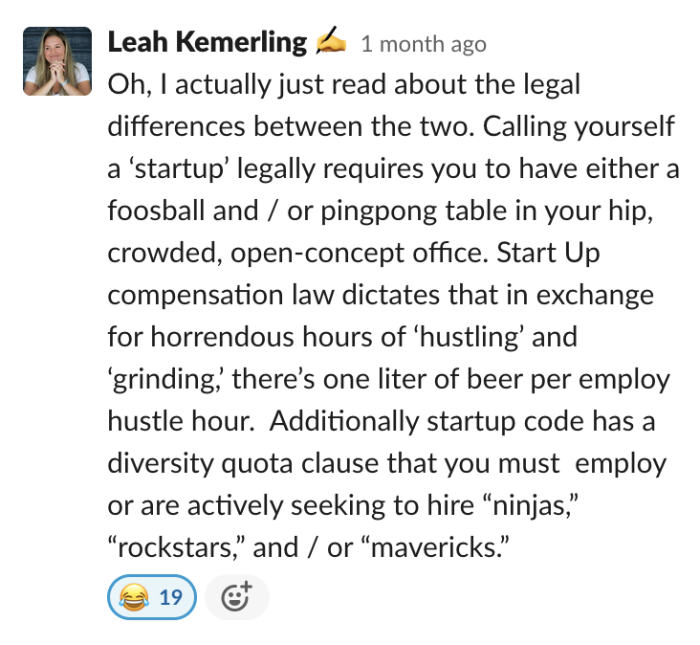 Jokes aside, I find it really interesting how blurry this line is. I asked a variety of people in the business and academic world: what’s the difference between a startup and a small business? Here’s what they said.

Startups are focused on growth

Paul Graham—co-founder of the Y Combinator startup incubator, which helped launch Zapier and a few other companies—once defined startups as being focused on growth:

A startup is a company designed to grow fast. Being newly founded does not in itself make a company a startup. Nor is it necessary for a startup to work on technology, or take venture funding, or have some sort of “exit.” The only essential thing is growth. Everything else we associate with startups follows from growth.

Graham goes on to say that this growth is aimed at large markets, typically international ones, and that the only way to grow quickly in that context is with some kind of new idea.

…if you want to start a startup, you’re probably going to have to think of something fairly novel. A startup has to make something it can deliver to a large market, and ideas of that type are so valuable that all the obvious ones are already taken.

This focus on growth means that startups typically operate very differently than your average small business. Ryan Lindsey, founder of a writing app called Daily Prompt, was one of the many people who linked me to Graham’s essay. He said the difference between a startup and a small business was clear in his experience:

I’ve had my own small businesses, and have also been part of scaling a startup from 3 to 100 employees, so I’ve been on both sides. If you’re not growing fast then you’re not a startup, you’re a normal company.

People disagree on what the word “fast” means, but what’s important is the focus on fast growth. The owner of your favorite independent coffee shop might dream of opening more locations, but that coffee shop probably wasn’t founded specifically with massive growth in mind. Most coffee shop owners don’t plan on becoming Starbucks in the for you in future few years, but that’s an example of the kind of growth startup founders are thinking about.

Small business owners are focused on other goals, like sustainably turning a profit, paying their employees, or providing drinks and a gathering place for their community. This focus leads to different decisions than a company that’s focused entirely on growth.

Neither one is better—they’re just different.

Startups tend to be all or nothing

Most small businesses are built to be sustainable, typically to serve existing needs in a particular community. Jed Macosko, a professor at Wake Forest University who has run companies in both categories, told me that startups don’t work this way.

Startups have two primary outcomes after a few years: either the startup fails, or the startup grows much larger than the initial team and investment. The whole point of a startup is to go far beyond the way it looks in the beginning.

This isn’t to say that small businesses don’t grow—they do. But the scale of that growth is different, and the growth doesn’t fundamentally change what the company is.

This also means the job of running a startup, or even just working for one, changes a lot. Dr. Michael Curtis, founder of Coursemarks.com, has worked in both spaces. Here’s how he defined the difference:

So there’s a chance your company is a startup and a small business, if you’re aiming for massive growth but currently aren’t very big. The lines are blurry, and that’s ok.

Generally, though, startups are aiming for quick, massive growth on an international scale. Most small businesses aren’t built with that in mind—they’re focused on sustainably serving a particular community.