You probably don’t know how to write code. In the 1970s, that meant you couldn’t use a computer because early devices didn’t really do anything unless you manually typed out commands.

That’s not true anymore—you don’t need to know how to write code to scroll through Instagram. This is what allowed computers to go from an obscure hobby to a part of everyday life. Most people would never have bothered to learn to use computers if they had to learn a programming language. It probably sounds so obvious that it’s not worth saying, but it’s a big deal.

What does no code mean?

Ryan Hoover, the founder of Product Hunt, calls these “no code tools”—and he’s not alone. The term is catching on among tech enthusiasts, and slowly breaking into the mainstream. Apps built using no-code tools are showing up on Product Hunt every day, according to Hoover. That’s changing the way the internet works.

“It’s not just engineers that can build something useful on the internet,” he told us. “It really could be anyone.”

Even, it turns out, someone with no clue what they’re doing.

I can’t code at all but built a thing anyway

I don’t know what my job is, but I know what it isn’t: coding. To me, GitHub is just the world’s most confusing place to download software. I think Python means snake. I don’t know what IDE stands for, and at this point, I refuse to learn.

I could go on. The point is that I can’t write code, but that doesn’t stop me from making things online.

About a month into quarantine, I wanted to make a thing that would alleviate my ongoing sense that time was a social construct with no objective meaning. I was able to roll out What Day Is It? By Zapier in a single morning. This service texts people every morning and tells them what day it is. 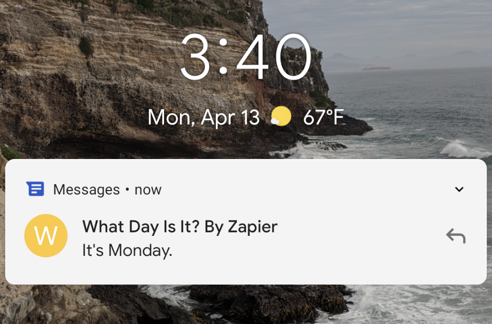 That’s it. That’s all it does. People actually use it.

I built this using Zapier, which is a no-code automation tool (and, incidentally, my employer). With a few clicks, I set up some simple rules—basically, if the current time is 8 a.m., send a text message saying what day it is.

As you might imagine, this power also has useful implications.

Ben Tossell is the Founder of Makerpad, a website with no-code tutorials and resources. He told me this kind of code-free development is growing.

“It’s about being creative,” said Tossell. “Now the barriers are lower to actually go out and build the thing.”

This is a change that could make the internet a very different place.

Here at Zapier, we help businesses build automations that connect thousands of apps, and they don’t need any programming knowledge to do so. This allows folks to quickly build connections between apps that, previously, would have required hiring a team of engineers.

Taylor Mills, the Director of Marketing at Apps Without Code, told me about a system they set up for following up with customers.

This is just one example. We can tell all kinds of stories about people using no code to quickly build tools that become essential to their organization. There’s The Perk, a Colorado coffee shop that built an online ordering system in a single morning. There’s DonorsChoose.org, a nonprofit for public education that automated a system to log donor emails. There’s La De Da, the Chicago gift store that made a process to mimic in-store interactions. And there’s The Ruby Tap, a Wisconsin wine bar that quickly pivoted to curbside pickup.

I talked to Dan Nelson, one of the co-owners of The Ruby Tap, about this. Nelson’s background is actually in engineering, but he decided the no-code route would work better.

“I could build it from scratch, but my time is better spent elsewhere,” Nelson told me. “Having tools like Zapier, that allow us to get us something off the ground in just a few minutes, is really valuable.”

Hoover told me that makes sense: “Regardless of whether you can code or not, no-code tools are the best solution for a lot of different things.”

Programmers aren’t any faster at scrolling through Instagram. It’s possible that, with no-code tools, they also won’t be any faster at building certain things.

“Democratize is a heavy word, but I think no-code tools democratize the internet to some extent,” said Hoover.

At Zapier, our mission is to democratize automation, and we agree: “democratize” is a heavy word. We hope we can live up to it, and make it easy for anyone on the web to create things.

Photo by Christina @ wocintechchat.com on Unsplash