What do Kim Kardashian, Armando Roggio, and your neighbor have in common? They’re all influencers.

Influencer marketing is the digital equivalent of word-of-mouth promotion. Within ecommerce, we can segment influencers into three categories: celebrities, authorities, and peers.

Celebrities. Most consumers think an influencer is a celebrity. Celebrity influencers are aspirational because they sell what others might aspire to. Millions of Gen Zs (under age 25, roughly) and Millennials (ages 25 to 40) model their purchases after Kim Kardashian, for example. They want the same makeup, food, and clothing.

Aspirational influencers are usually expensive and correlate with audience size — the larger the more costly, especially for mega audiences of 50 million or more followers. I’ve seen fees of $500,000 and more for audiences of that magnitude.

For ecommerce merchants, the practical considerations to using celebrities depend on how broad of an appeal a product or service carries, as well as risk tolerance. Gigantic audiences mean loose targeting. This is why you’ll see Kim Kardashian, with 219 million followers on Instagram, promoting Uber Eats and other generic categories, as a large segment of her followers will presumably find them useful. Niche products with a narrow focus typically experience a poor return on investment with aspirational influencers. 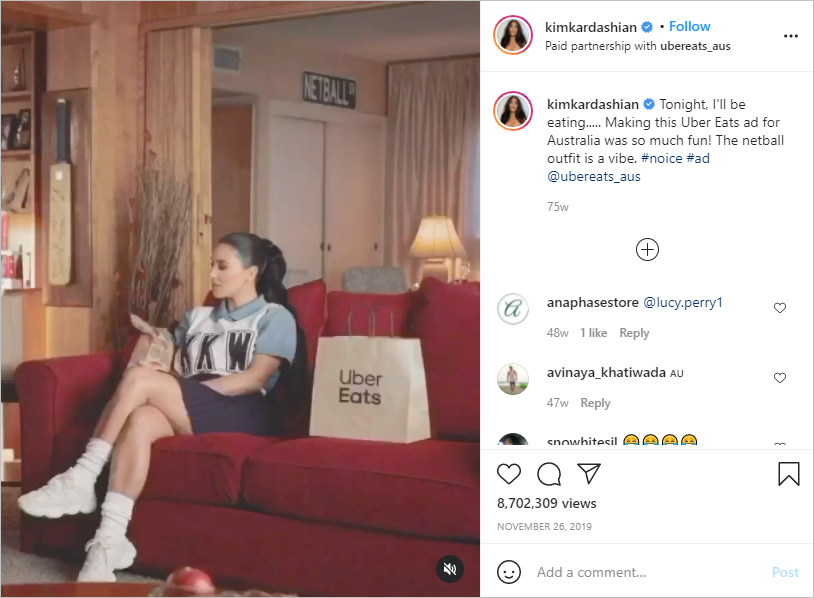 Celebrity influencers such as Kim Kardashian offer massive audiences — and a high risk to merchants. Kardashian has 219 million followers on Instagram.

The risk has to do with spending the money (or, in some cases, a share of a company) in the hopes a single voice will drive response. To be sure, celebrities can have a big impact. But they are not for the faint of heart and beyond the reach of most ecommerce retailers.

There is a caveat, however, with authoritative influencers. The career’s worth of trust can be lost quickly if their credibility is questioned. Thus authoritative influencers have to be exceedingly careful in the products and services they vouch for. Like celebrity influencers, acquiring the influence rights of authorities can be expensive, although less than celebrities. Moreover, the risk of using authorities is lower as their audiences are more aligned with the promoted products and services.

Peers, micro-influencers, nano influencers — all are arbitrary names for the most common type of ecommerce influencer. They are best understood in the context of your neighbors. Say you purchased a Tesla because Kim Kardashian did. That’s aspirational. But what if all of your neighbors buy a Tesla? Regardless of how you feel about the product, you’re likely going to wonder what they know that you don’t. Peer influencers are the digital equivalent of keeping up with the Joneses and recognizing the trust we put in the opinions of those we know.

Peer influencers are generally the least expensive and the easiest to test. The cost is as little as $10 for influencers with fewer than 1,000 followers.

Peer influencers are generally the least expensive and the easiest to test. In this example, “completely.maginlee,” a Los Angeles-based mother with roughly 16,000 followers on Instagram, promotes a linen brand.

Ecommerce merchants will often create campaigns using an aggregate of peer influencers and then apply filters such as geography, interest, network, number of prospects, and other variables.

Peer influencers carry a much lower risk. A 50-million audience made up of 50,000 peer influencers has a higher probability of success versus a similar-sized audience from one person. Spreading the risk and paying less is why ecommerce brands have flocked to peer influencers.