Over the span of thirty years, Niklas Luhmann published more than 70 books and nearly 400 academic articles—a measure of productivity that would make Stephen King blush (and George R.R. Martin cringe). As a sociologist, Luhmann’s interests ranged from law to mass media, religion to economics, but no matter the subject, even his critics agreed: the man knew what he was talking about.

So how did a brewer’s son churn out work after work of such consistently high quality? By pioneering a productivity system he called Zettelkasten—German for “slip box.” Luhmann claimed that his Zettelkasten became a conversational partner, constantly challenging him and prodding him on to greater productivity. And thanks to its power and simplicity, today the Zettelkasten method has been adapted to fit the workflow and information management of any creative pro or knowledge worker.

Like vinyl records and hardcover books, Luhmann’s original system was analog. It consisted of numbered index cards, or slips, filed in six large cabinets. Each slip contained a single and complete idea (a concept his followers call “atomicity”). An idea might be as short as a simple sentence, or as long as a paragraph—but it had to fit into the space of a zettel, the equivalent of a half-sheet of paper. 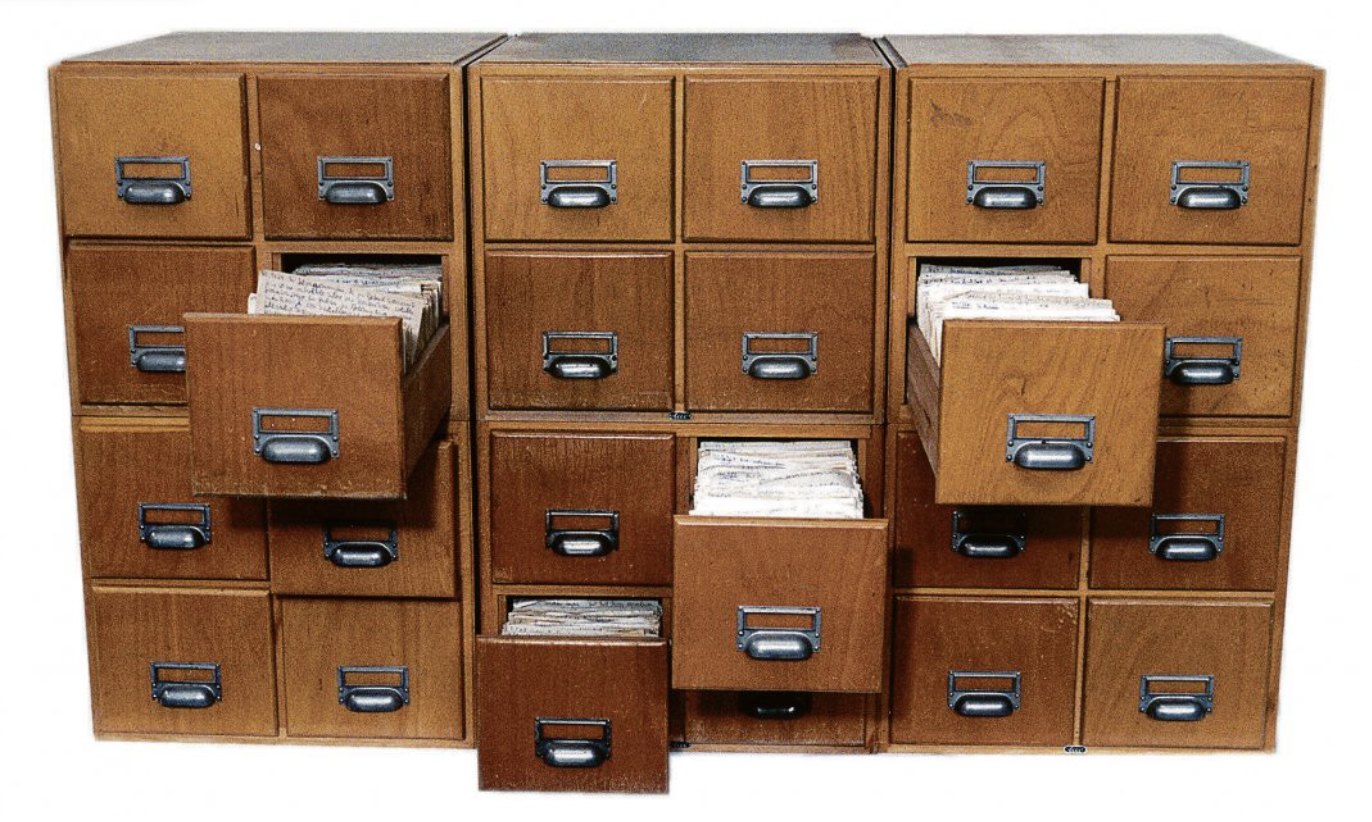 Luhmann never suffered from writer’s block. Even with a relatively small number of notes, he always had something to start with when undertaking a new project. And by connecting related notes together, he often had an outline of a project before he started it.

His system also offers a low barrier to entry. Psychologists have found that one reason we procrastinate is self-doubt and efficacy issues—the upfront costs of a new project often loom large when future outcomes are so uncertain. But the costs of jotting down just one well-formed note isn’t a deal-breaker. If an idea has value, it will rise to the surface as more related notes emerge.

And relations are key. At the time of his death, Luhmann had created 90,000 cards. That’s an astonishing number, but the system’s power rested in the links between notes. Like synapses between neurons, note links exponentially increase the value of the system.

First, each card had a unique index number, or address, using numbers, letters, and occasional punctuation based on a branching hierarchy. So instead of numbering his cards in a traditional “1,2,3” sequence, the first card in Luhmann’s system might be 1, but the second card would be 1/1 if it continued the topic. The third card would be numbered 1/2, but if it only extended the idea on the second card, it would be numbered 1/1a. And so forth.

Image from abramdemski via Less Wrong

This branching logic resulted in long but meaningful card addresses such as 21/3d26g53 (an entry on one of Luhmann’s intellectual rivals, Jürgen Habermas). That means an idea, no matter how old or new it is, can always be positioned near other cards on the same topic. (The LessWrong website has a great description of this addressing system if you really want to geek out.)

The second method of connecting cards was through explicit reference links. At the bottom of each card, Luhmann would jot down the address of cards with related ideas but positioned under other topics. Following these links, Luhmann could jump across his sprawling note collection and make new connections among ideas.

And that’s how the system “talked” to Luhmann. His creativity and productivity took place not in his own mind, but in a dialogue between his first and second brains.

As contemporary productivity guru Tiago Forte has written, Luhmann’s hopscotch linking methods look a lot like pages on the web:

There is no hierarchy in the Zettelkasten, no privileged place, which means it can grow internally without any preconceived scheme. By creating notes as a decentralized network instead of a hierarchical tree, Luhmann anticipated hypertext and URLs.

For nearly two decades after his death, Luhmann’s Zettelkasten method remained virtually unknown outside of a small circle of knowledge-management geeks. That began to slowly change in 2017, when Sönke Ahrens self-published a short book in English titled How to Take Smart Notes.

Today, the book ranks #2 in the “study skills” category at Amazon, and #7 in the “time management” category. And thanks to the favorable reception on productivity blogs like Forte’s, Zettelkasten has begun to blow up online. Today, a Google search will return well over 200,000 results, and hundreds of how-to videos have popped up on YouTube. 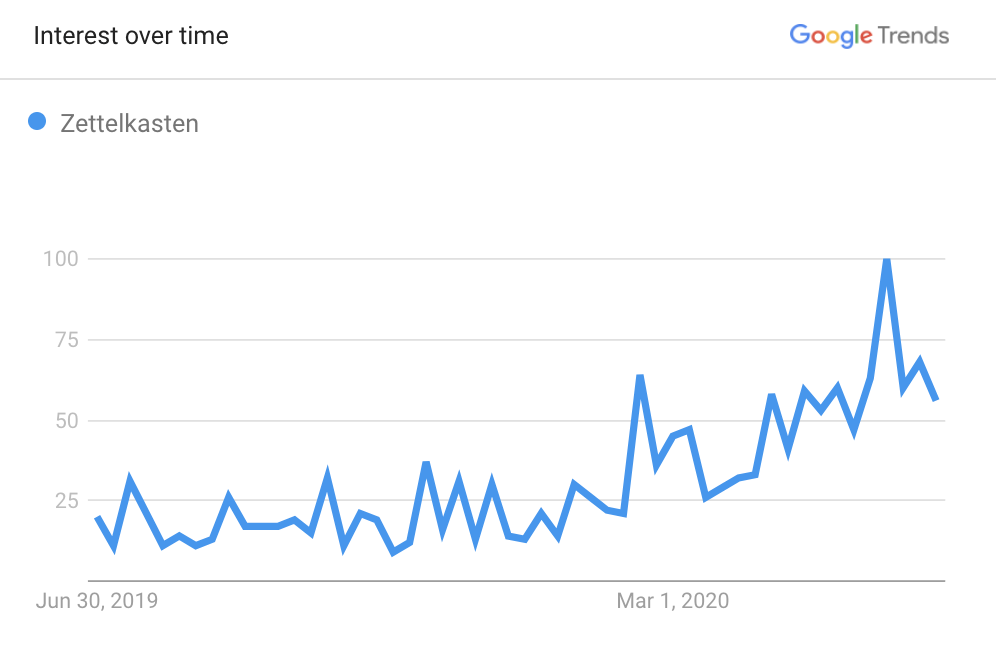 Zettelkasten searches are accelerating on Google

Zettelkasten is an obvious candidate for digitalization. Robust full-text search, non-hierarchical organization, and access to the notes from anywhere or any device take Luhmann’s great idea and make it even more powerful.

Right now, there are three ways folks are bringing Zettelkasten to the digital world.

Use an existing app

Some are overlaying the method onto their existing note app. You can find many tutorials on how to use Luhmann’s technique in Evernote, OneNote, and Notion. The great advantage of this approach is that you don’t have to learn new software and you can start building your own Zettelkasten with existing notes.

But purists will point out that existing note-taking apps miss functionality such as backlinking or atomicity. And then there’s the Wunderlist syndrome. What if you built a deeply linked Zettelkasten of 20,000 notes and the platform you used went out of business? You might be able to save the contents of the notes, but what about the structure—all the links between notes?

A second approach is to use software developed specifically for Zettelkasten. Hands down, apps like Zettlr, The Archive, and the shiny new toy on the block, Roam, offer users an experience that digitizes and extends Luhmann’s analog system. While The Archive might be the genre’s granddaddy, Roam has generated a base of fanatical users in the span of a few months and has just come out of its invite-only stage.

Roam does seem like a perfect fit, especially when it comes to the atomicity principle. In a Roam document, any chunk of text in any note is a database entity, which means that you can link and relate parts of notes to parts of other notes. Roam even offers a graph of your links, allowing you to visualize the connections between ideas. But that level of granularity comes at a steep price. Demand for a beta invite was so great that Roam’s new entry tier is $15 a month. 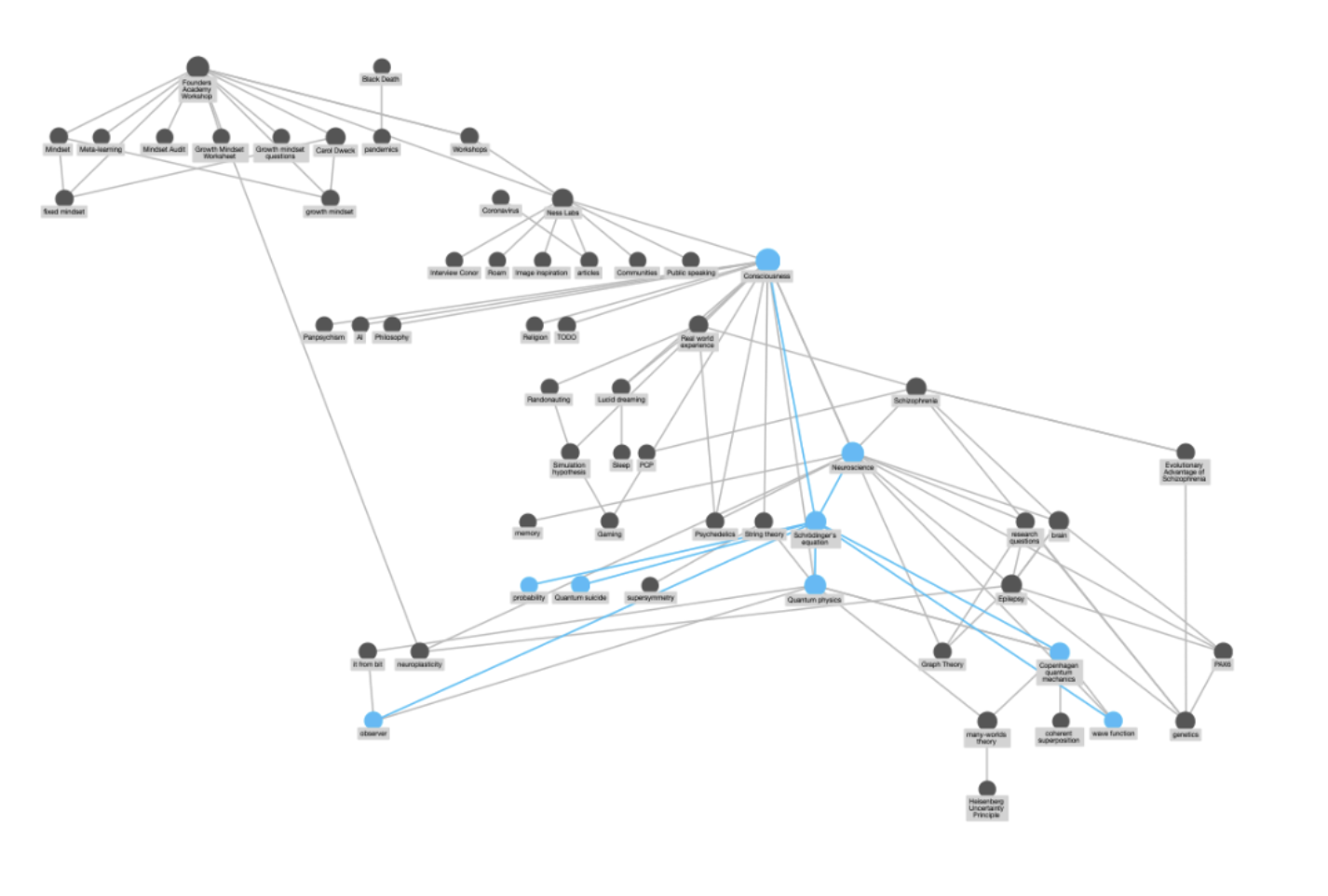 A graph of related notes in Roam , from Ness Labs

But even bespoke apps face the same concerns around databases and proprietary file formats. So the third method for creating a digital Zettelkasten is to use plain old file systems and text files.

Simply put, you can build a functional Zettelkasten using a cloud storage provider such as Google Drive or Dropbox and get 90 percent of the necessary features. There’s no proprietary note format or database lock-in, and any type of file you can save to the drive can serve as a note—whether it’s a Word document, PDF, downloaded HTML file, or Markdown. In the case of Google Drive, the file system’s search feature can even scan text in images, meaning you could take notes in longhand and scan them to your Zettelkasten.

The drawback, of course, is that it’s nearly impossible to add note links to existing PDFs and image files. Workarounds exist, like inserting links into metadata or keeping track of inter-note links in a master spreadsheet. Some users even embed images and PDFs in text files to which they add links. But let’s face it—the hassle factor is huge.

Obsidian—an early beta app from the creators of the popular outlining tool Dynalist—uses your local file system and a Markdown editor that enables backlinking. Like Roam, it also provides a graph view that visualizes the connections between ideas. And nvUltra, which also looks to provide all the essential Zettelkasten tools in a markdown editor, is set to move into beta soon. 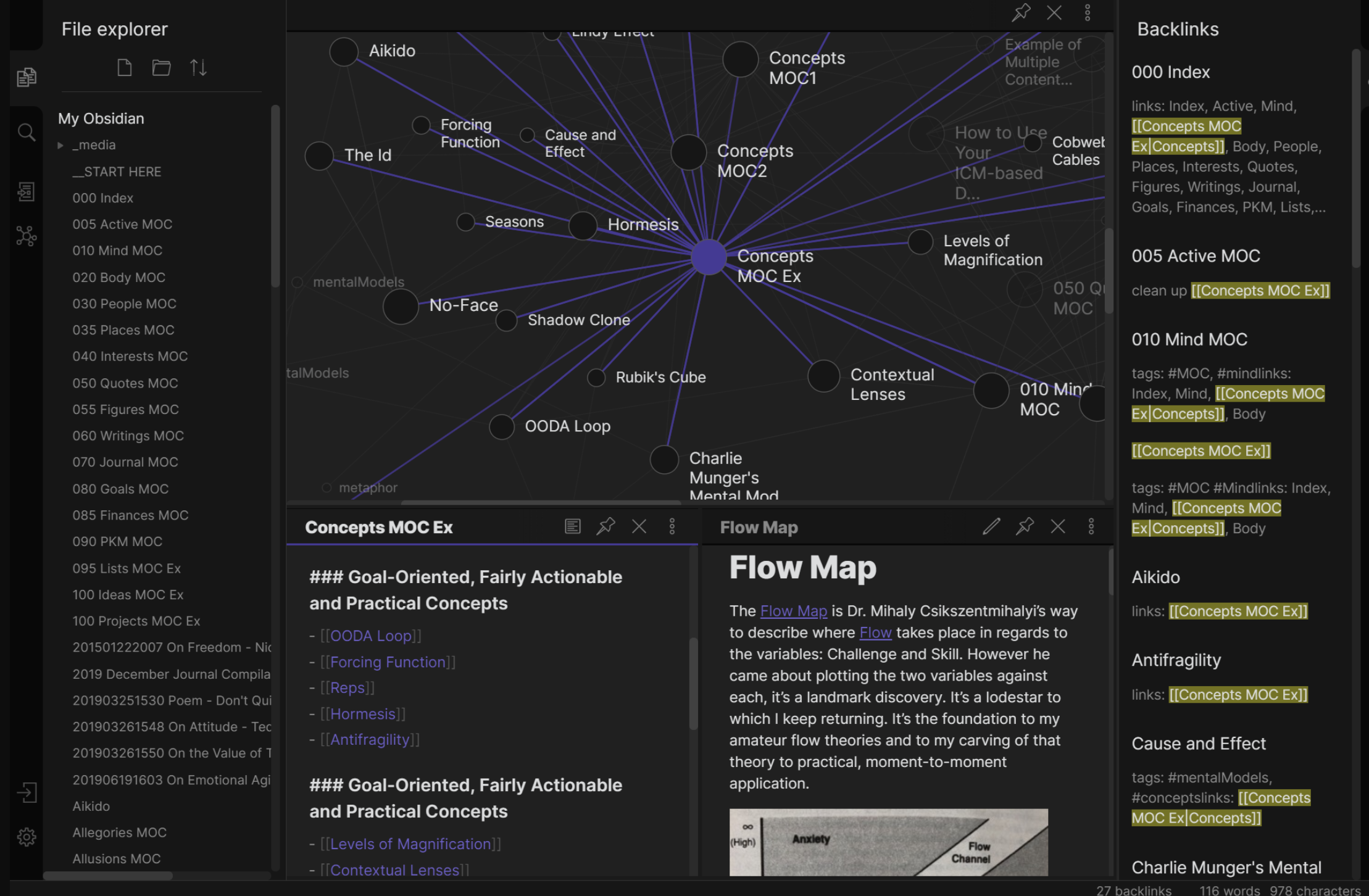 While still in their very early lives, either might be the right solution for users who are anticipating thousands of intricately linked notes and are worried about privacy or lock-in.

If there’s no perfect solution yet, where do you start your Zettelkasten? The best advice: choose a few different candidates, create a small sample of notes, and audition the apps, testing for key considerations.

Your ideas probably exist in a variety of digital apps right now, such as Kindle notes, web annotation tools, Office docs, or multiple cloud drives. So you might want to investigate ways of automatically bringing that data together into your Zettelkasten.

A good question to ask is whether your app can use a third-party automation and integration tool such as Zapier to bring it all together. Zapier can send info to and from apps like Evernote and OneNote, for example.

Learn more about how Zapier works.

In my case, I keep a reading list and book outlines in Coda. When I jot down a reading note or quote that belongs in my Zettelkasten, I can tag the note to trigger a Zap that creates a new text file in Google Drive. That text file contains the note (obviously) but can also include links, tags, bibliographic information, or other data I might have collected in Coda. Shazam!

In the end, whatever you can use to reduce the friction of getting ideas into your Zettelkasten will improve its utility—and your own productivity.