While most Analytics reports show the immediate source (“last click”) of traffic and conversions, Assisted Conversions identify the relationship between all channels and conversions.

“When I want to attribute conversions to different campaigns beyond the last non-direct click conversions that you see throughout Google Analytics reports, I go to…the Multi-channel Funnels,” said Oeuyown Kim, a senior analytics strategist with Portent, a digital marketing agency.

“I am usually most interested in [Assisted Conversions]. It is really underutilized,” Kim said.

Kim pointed out that the analysis can apply to any combination of conversion goals. Thus one might seek to understand how a channel impacts a single goal or review how all channels impact conversions collectively.

What’s more, one can apply the results to familiar reports, such as Source/Medium.

Kim also suggested exploring dimensions. An example is focusing on specific campaigns to understand how channels interact and perform. 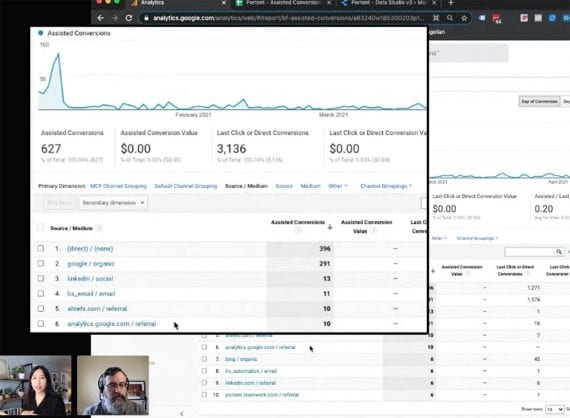 During her demonstration, Kim described many ways to use the Assisted Conversions report.

Within Assisted Conversions, Conversion Segments allow you to examine conversion paths in detail. For example, Kim created a user-defined (custom) segment to track visitors that moved from a display ad to organic search.

“Let’s say that you have users who have come in through a display ad on their first interaction with your site. You’re wondering how many of those [visitors] converted through organic search…when you create a segment like this,” Kim said during her demonstration.

Using Conversion Segments specifically and the Assisted Conversions report generally may help you better understand what is really driving conversions for your company’s website.