Covid-19 has throttled the U.S. economy, dropping the nation’s gross domestic product 31.7 percent in the second quarter of the year. The economic effect, however, has impacted folks differently.

The onset of the pandemic created economic uncertainly for most worldwide consumers. Many were furloughed. Some are working from home for the first time.

The economic effect, however, has impacted folks differently.

Stimulus checks and even unemployment stipends made stay-at-home orders and temporary business closures manageable. Many of these folks may be thriving in some ways. And many are the same people who have helped drive the S&P 500 back up to $3,401.20 on September 15, 2020.

Others have not fared as well.

For example, in August Fidelity, an investment firm, noted that roughly 711,000 individuals, or about 3 percent of eligible employees, had taken distributions from their retirement accounts to cover expenses related to the downturn. These distributions were permitted in the CARES Act.

The fate of these consumers may have a significant impact on retail sales in the for you in future few months, including the holiday shopping season.

“This is a very unfortunate situation, but I think you got a tale of two cities in terms of consumer spend,” said Peter Sheldon, senior director of commerce strategy at Adobe.

“You got two categories of workers in the U.S. You’ve got the category that lost their job — the airline workers, the hotel workers, a lot of people in hospitality and restaurants. They are going to be in a very conservative spend mode. They are not going to buy big-ticket items. They are going to cut back considerably and look for bargains. As it relates to online [shopping], they’re certainly going to buy from merchants that offer installment plans.” Sheldon said, describing some of the trends that could impact holiday shopping in 2020.

“Then you got the flip [side] …. people who never lost their job. They may have had bonuses through some of the government programs, and they may have more disposable income. Plus, they’re not traveling. They haven’t planned a holiday for this winter. They’re not getting on a plane at Christmastime to see family. They’re staying at home.

“There is quite a considerable savings,” Sheldon continued, “and it’s not just happening in the holidays. It’s been building up over the last few months as those consumers have been spending less. A lot of those folks are well placed to spend quite heavily during the holidays.”

Omnichannel and pure ecommerce retailers may want to consider which of these two economic categories encompass most of their core customers.

For example, businesses selling what Sheldon calls “hobby gifts” may benefit from shoppers with available funds and time on their hands.

“There’s going to be a lot of focus on … staying close to family and so forth,” Sheldon said.

“There is going to be a lot of investment in gifts that [help] people take on new hobbies. You know, musical instruments for the kids, family games, getting into woodworking, carpentry. And it’s not just buying a Lego kit for the kids. It’s buying a big Lego kit that keeps them occupied for a week instead of two days. It’s that type of thing,” Sheldon said. 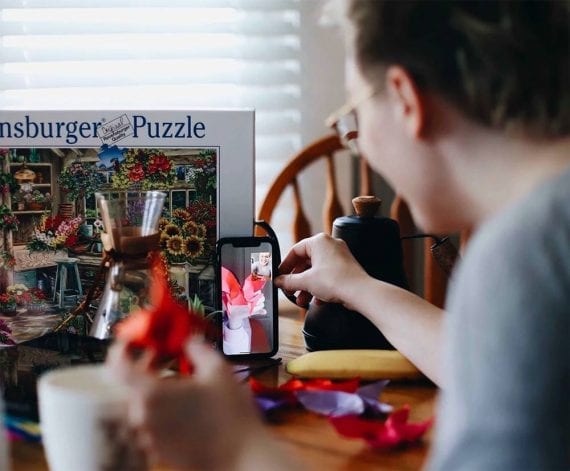 Retailers may want to consider which of two economic categories encompass most of their core customers. “Hobby” retailers that sell games and puzzles could have a strong season. Photo: Tabitha Turner.

Businesses in these spaces can emphasize just the sort of “new hobby” behaviors Sheldon is describing.

In other segments, merchants can cater to the opposite type of shoppers with limited income and savings. This might mean rolling out layaway or financing options or early discounts.

Thus holiday shopping in 2020 could be a tale of two consumers: bargain hunters without jobs and stable earners with pent-up demand.